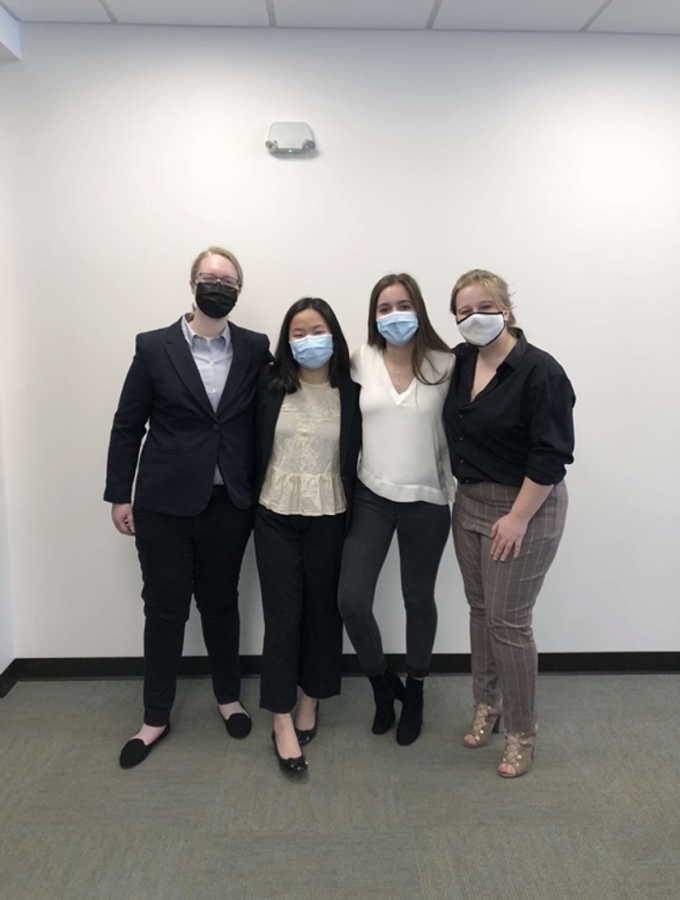 This year's seniors (from left to right): Lucy Cheeley, Irene Jiang, Bella Dardon, and Hana May

This season Mock Trial had 4 competitions. There were two meets for the defense side and two for the plaintiff side. The case this year was about a happy couple set to be married on July 4th, 2020, but when COVID-19 hit and restrictions were set by Governor Walz, complications unfolded and ultimately the couple decided to sue the wedding venue, Nixon Lodge and Catering. Their first trial was against Bemidji high school with the SJP team representing the defense side. The team was led by three trial lawyers, Sylvia Johnson ’22, Cambel Shepherd ’23, and Irene Jiang ‘21, and three witnesses, Isabella Dardon ’21, Emma Krey ’24, and Noelle Buehrer ’22, with Clare Duffy ’22 as their timer. The defense case was on behalf of the wedding venue company, Nixon Lodge and Catering hired by the couple. The team put forth strong efforts and pulled off a win 218-206.

The second trial was against Cathedral high school with SJP representing the plaintiff’s case. The plaintiff’s case is on behalf of the happy couple who is suing Nixon Lodge and Catering. The three attorneys representing SJP were, Clare Duffy ’22, Irene Jiang ’21, and Cassie Zeng ’21 with their three witnesses, Hannah May ’21, Oscar Cheeley ’23, and Noelle Buehrer ’22. It was a close call but unfortunately the plaintiff team did not win this trial and ended up with a final score of 218-229. The teams third trial was against Glencoe Silver Lake with the SJP team on the defense side. With the same team of lawyers and witnesses and a new timekeeper, Alex Beumer ’21, they were able to pull a strong win with a score of 227-206. The team’s final regular trial of the season was against Ashby high school with the SJP team representing the plaintiff’s case. After some intense examination and testifying, the team earned a solid win with a score of 208-191. After gaining many high scores and wins, the team managed to qualify for the playoffs for the State Regional Mock Trial competition. They faced Buffalo high school where they battled out a heated trial. The SJP team represented the plaintiff’s case and with some last-minute rearrangements, the three lawyers were Sylvia Johnson ’22, Clare Duffy ’22, and Isabella Dardon ’21, and the three witnesses were, Hana May ’21, Lucy Cheeley ’21, and Noelle Buehrer ’22, with Alex Beumer ’22 as their timekeeper. It was a very close call, but the team did not win and ended up with a final score of 321-345. This trial concluded the Mock Trial season. The whole team preformed excellent this season and with the help of coach Katie and coach Greg, they gained many wins. Both coach Katie and coach Greg are very proud of all of the Mock Trial participants this year and hope to see them advance even further in the future.