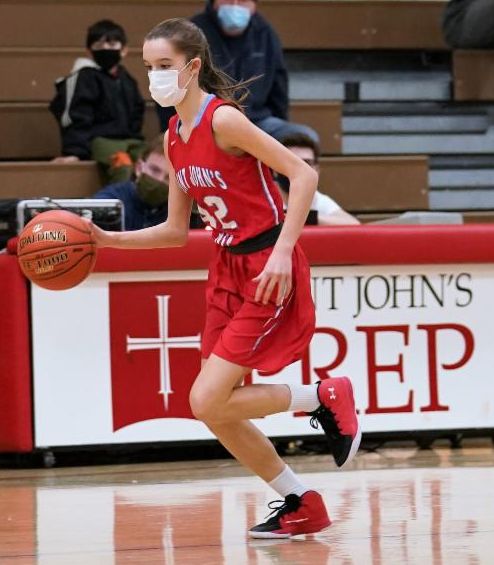 This year the girls’ basketball team was presented with a few obstacles before the season even began. The threat of COVID-19 looming over us before practices were able to officially begin, new coaches, and introducing six new players to the varsity squad, we were a little anxious to say the least. As the season began, the dynamic of the team was fairly awkward, and rightfully so. The team had one senior (Valeriya Woodard), one junior (Jaedyn Nydeen), three sophomores (Clara Schleper, Kate McGee, and myself), no freshman, and six eighth graders (Sylvie Bechtold, Miranda Meyer, Louise Ruzanic, Madison Burris, and Amanda and Sarah Bolton). Although this may have been the case for a week or so, we ended up creating a great team dynamic as the season went on, making a fun and energetic atmosphere for us all. This refreshing feeling can also be attributed to our coaches as well.

Our coaches, Mary Nicklawske, Carrie Hoover, and Sarah Ouimet pushed us to be our best every day at practice. They always challenged us to improve and give it our all when we were tired, encouraging us to help one another, working with us to determine our weaknesses, but the most notable part of all is the fact that they never doubted our abilities or were afraid to push us because we were girls.

Our coaches pushing us to our limits this year was truly the largest reason that we were as successful as we were. Thanks to their wonderful coaching, we were able to finish our season 7-3, with a six game winning streak to begin our season. This was an incredible feat that brought us a feeling of confidence, and we only wanted to keep pushing ourselves. This caused everyone to improve, but most notably the eighth graders who were able to step up their game and become key members of the squad.

Overall, I don’t think we could have asked for a better season. We were able to find great success, improve our team bond, push ourselves, and were finally able to see the possibility of a bright future for prep girls basketball. If it weren’t for the efforts of each individual player on the team, we would not have been able to get to the point of improvement and success that we did. Although the season is over, we will only continue to improve and push one another throughout the summer in preparation for next season. Here’s to our 2020-2021 season, and to what the future holds for our team.