Boys Will NOT Be Boys 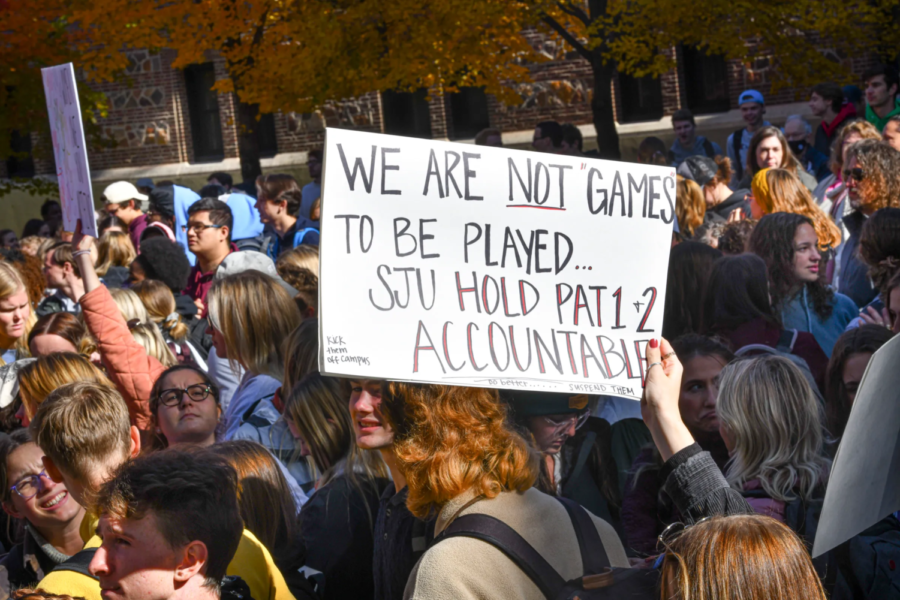 This past Thursday, October 21, there was a protest outside of the Quad at Saint John’s University. It was organized by the Institute for Women’s Leadership (IWL) to address the recent events on campus. On the first and second floors of Pat Hall, a group of sophomore boys created a competition. In this alleged competition, these boys have sexual encounters with as many female students as possible, rate them, rate their experience, and then put it all together in a list. This list got reported and started to spread. The RA, Liam Miller, on Pat 1, called a mandatory meeting for all the boys in Patrick Hall.

According to an article from the CSBSJU Record, in this meeting, Miller talked about why this behavior is not okay and how it absolutely cannot be tolerated. There were four of these meetings, yet nobody confessed to anything.

Without evidence or people to accuse no one can be held accountable, so the campus hired an external investigator.

Since no action was being taken, the students decided it was their time to put an end to this and stand up for themselves. So, the Climate Justice Club (CJC) emailed all of the Bennies about participating in a walkout.

“The purpose of this is to push the administration to take more action,” said the CJC, “The more Bennies present, the bigger message we will be sending.”

The walkout started at one in the afternoon, and both Bennies and Johnnies showed up. Most had posters saying, “I am more than an object!” “#StopRapeCulture” and “Boys will NOT be boys!”

Also, interviewers from Kare11 showed up and interviewed both men and women about their opinions in this situation.

This walkout made many people proud and showed that this behavior is not justifiable. They truly followed CSB Transitional President Laurie Hamden’s words, “Administration can do a lot, but without students, it will be incomplete.”

I believe that this statement applies to Prep as well. High school boys may not be having competitions such as this one, but there are still aspects that can be improved. For example, boys judge girls’ bodies, and toxic masculinity still exists, proven by the saying “boys will be boys.” I think that we should all have ongoing conversations in our homerooms about why this behavior is not acceptable and how to prevent it from getting worse. We need to teach boys at a young age that women are not objects for them to judge. We need to stop letting boys off easy just because it’s “how they are.”

Women should not have to feel scared of men at all, but especially not at school. We shouldn’t have to live in this constant fear of being objectified wherever we go. That’s why it is so important to teach men this is unacceptable. It’s 2021 and it’s shameful to still have this problem today. But, there are improvements being made, and we can see this by how Johnnies showed up to the walkout as well as Bennies. If we all have a conversation about this and why this is not okay we will create a better future for us all.