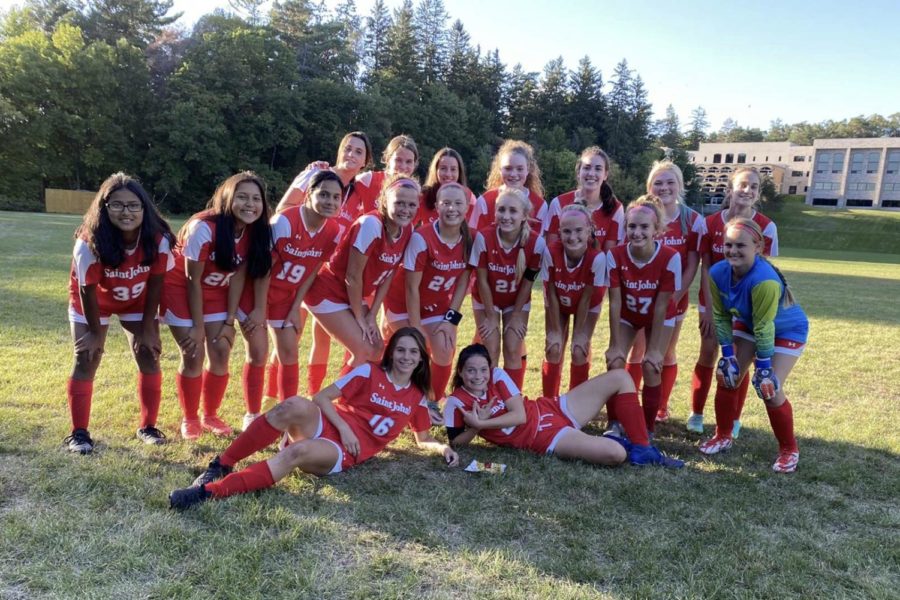 On Thursday October 4 the girls soccer teams officially closed the end of their seasons at Gorecki Center at Saint Benedict. The night was a celebration of an incredibly progressive as well as successful season for both the JV and Varsity teams, as well as a look back on how much they truly accomplished.
Last year as the school year came to an end and summer began, questions arose about how the girl’s new head coach, Kris Fremo, would handle summer practices. About halfway into June that question was answered. The first day of summer skill building had began, and needless to say the 7:45 a.m. start time was definitely an adjustment. The team had these sessions twice a week all summer long, and the first test of their season would be the pre-season scrimmages against ROCORI and Sauk Rapids. Before the scrimmages the team was incredibly nervous, as they hadn’t played a game together in over a year, but as the first scrimmage began, the nervousness faded away. They played well together, and ended up beating ROCORI and tying Sauk Rapids. Although these games didn’t count towards their season, this was the first time they had won a game in over a year. This confidence boost helped them begin their season with a 3-0 winning streak. As the season continued there were ups and downs, and about halfway through they had a home game against Little Falls.
All day there had been speculation about whether or not the game would happen, as the forecast showed that it would begin to storm right around the time the first whistle was supposed to blow. Although the forecast was grim, the first half began. Little Falls was the first to score, but that did not hinder the spirit of our girls. A little while later there was a free kick for the Johnnies. Senior Captain Jaedyn Nydeen stepped up to the plate to take the kick. Everyone held their breath as the referee blew the whistle, and Jaedyn sent the ball right into the back of the net! It was now a 1-1 game, and that score stayed that way through the first half. The second half began, but the sky was darkening fast. Less than 10 minutes into the second half lightening struck, sending all of the players into the school. For every lightning strike you must wait 15 minutes, and if one more strike was spotted that would mean the game would end in a draw. This tie would be huge for the Johnnies, and as the delay time was ticking down, another strike was spotted, ending the game. This tie played a huge role in how the girls were seeded for playoffs, as Little Falls had a final record of 14-4-1, and the only team they tied all season was us.
This momentum helped the girls throughout the season, and with only a couple weeks left in their season found out they were on track to be the #1 seed in their section. For the rest of the season the girls worked hard to keep this spot, and it payed off, allowing them to hold on to the #1 seed entering the playoffs. This was the first time SJP has had the #1 seed in over 10 years, which was an accomplishment in itself. The girls played Melrose in the first round, winning 1-0. This win sent the Johnnies into the next round against Cathedral.
The game took place on a Saturday, and Johnnie fans packed the stands at the Saint Benedict soccer complex. Before the game the girls reminded each other that it was time to give it everything they had to win this game, and were told to put their hearts into every minute they were on the field. As the first half began, the energy from the fans was electric, and helped the Johnnies to push through the half. At the half the score was 3-1, with the Crusaders holding the lead. Entering the second half, the Johnnies knew that they had to push themselves even harder and give the game everything that they had. The Crusaders had a comfortable lead, but were not prepared for what the Johnnies were about to bring. The team was explosive in the first 15 minutes, and their efforts payed off. About halfway through the half, the ball was crossed into the eighteen yard box, and the ball deflected off a Cathedral player straight into the back of their own net. The score was now 3-2, and the Johnnies played even harder, leaving their hearts on the field. Unfortunately the team did not come out with the win, but the girls were not discouraged.
This season showed the Johnnies just how much they are capable of entering the next season. The growth, team relationship, and success this year has given the Johnnies a new confidence boost entering the offseason. The team has collectively made the commitment to bettering their skills this summer in order to be ready for the season next year, and are excited to continue building the program with one another. If this year is any look into what next season will look like for the SJP girls soccer team, then who knows what the future will hold for them all.