On Saturday November 6th, SJP sent three runners to state. Nick Hansen ‘24, Olivia Pauly ‘26, and Zach Meyer ‘24. Through hard work, and persistence these athletes made their way to the highest competitive level they could make. Their experience, exciting. I sat down with them to interview what it was like. 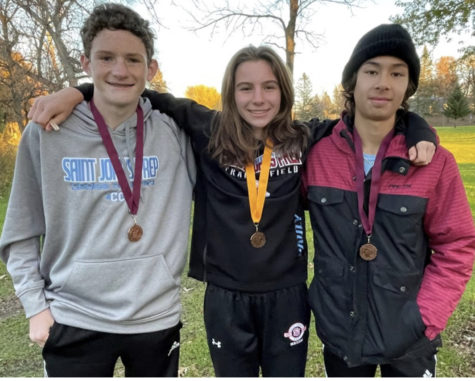 When I sat down with Zach Meyer ‘24, I asked him what it was like when he knew all his efforts and work had paid off and that he was going.

I asked him how the experience was and what was the best part of being at state.

“My least favorite part was running,” he said. “I enjoyed the experiences being there with the coaches, the best part was having Mr. Stark walk me through the course.

What was good, what was bad, and how was your anxiety?

“The best thing was the experience with the coaches, the thing I didn’t enjoy was the running. Overall state was amazing, and hopefully I will go again next year!”

When asked about what she thought when she made it to state, Olivia Pauly ‘24 replied very confidently,

“I was very certain that I was going to make it, but very relieved when I did make it”.

How was the state?

“State was fun, lots of people, never have had that many people at a race and the experience was exciting and fun.

When I asked Nick Hansen ‘24 the same questions he said,

“It was really hard, to think after I finished sections, I was very relieved once I finished. The whole time you have this feeling that worrying that you are going to fail, and then once you succeed you are just happy that you made it. “

Nick described it as an exciting, and hyped environment with lots of people, “Good People!”

Nick and Olivia both said that at state it was fun to be there, and watch the other races. Watching the other people finish gave them confidence that they would finish. Both commented on the experience and how much fun it was. Olivia was proud of how she finished but slightly disappointed for not improving.

Next I asked both of them what the nerves were like?

They both replied, “I usually don’t worry but this race with so many people was just nerve racking.”

They both said they took the race without pressure because making it was amazing for them. Both of them look forward to the next as well as Zach does too.

“This year the SJP cross country did extremely well”, commented Mr. Nydeen at the end of the year banquet. He is proud of their accomplishments, and their hard work.

The cross country team had an amazing year this year, and it was a bittersweet end to the season, for they all wanted it to continue. The team this year worked together and did the best prep they have done in many years. They impressed and shocked surrounding schools. Congratulations to Nick, Olivia, and Zach, and to the whole team on an amazing season!