The Story of Ferguson – Police Militarization 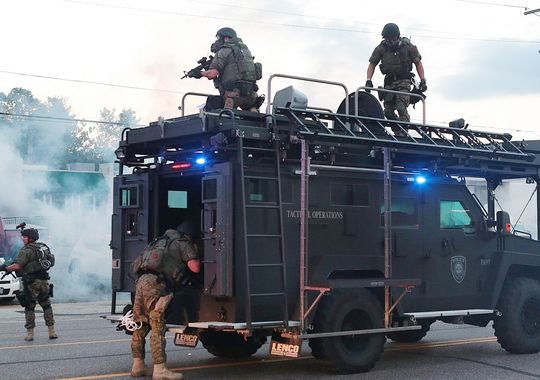 Everything started on Saturday, August 9th when Ferguson police officer Darren Wilson stopped Michael Brown and his friend Dorian Johnson because they were walking in the middle of the street. No one is quite sure of what happened next, but it resulted in the death of Michael Brown. The next day it was reported that Brown was unarmed when he was shot. That night a vigil erupted into violence with the looting of stores.

On Monday, August 11th police started using armored vehicles and tear gas. Police would later arrest and throw tear gas at different news reporters. On Thursday, August 14th the Missouri State Highway Patrol took over police action in Ferguson. The following Friday protesters and police clashed once again. Rocks were thrown at officers and tear gas was used to disperse the crowds as armored vehicles returned to the streets.

On August 16th , one week after Brown’s death, Ferguson was declared in a state of emergency. That evening police reported that Molotov cocktails had been thrown at them. The police dispersed the crowed with more tear gas. On Monday, August 18th the governor of Missouri, Jay Nixon, ordered the National Guard into Ferguson after protesters shot at police, threw Molotov cocktails, and made “coordinated attempts” to block off roads and to invade the police headquarters. The same day the New York Times reported that a private autopsy found Brown to have been shot six times; four shots to the right arm and twice in the head.

The first night of relative calm in Ferguson came on Thursday, August 21st. Later that night Governor Nixon ordered the National Guard out of Ferguson. Finally, Senator Claire McCaskill held a hearing to examine “police militarization”. These programs are under increased scrutiny after many people spoke out about how police in Ferguson were clad in camouflage and body armor, while carrying assault rifles. At the moment three federal agencies provide money and equipment to local police: the Pentagon, the Justice Department, and the Department of Homeland Security. The Pentagon program has attracted the most attention, because it supplies police departments with anything from grenade launchers to armored vehicles. Supporters of the program say that it supplies police with the necessary equipment in case of a terrorist attack, but it also brings the more mundane things such as copy or fax machines, which most police departments couldn’t afford. In the end, what happened in Ferguson will change how we view the law enforcements use of extreme force.